'Round of Your Life' review 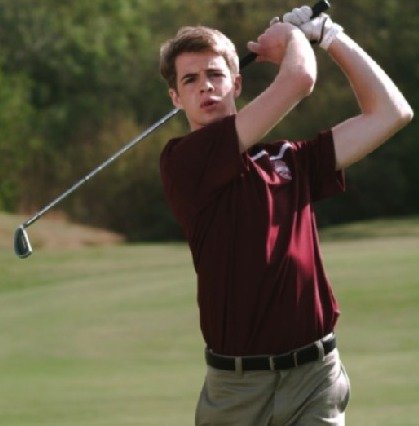 From director Dylan Thomas Ellis, Round of Your Life tells the tale of a golf prodigy who is resisting his calling.  Said prodigy is played by teenager Evan Hara, making his big screen debut, and his character - Taylor - is a high school freshman from a golf family; dad's a retired professional player, his brother is on the PGA tour, but the boy has the most natural talent of them all.

The problem is, he would rather be playing video games and defying his father, so he deliberately blows his tryout for the school team.  That prompts an angry reaction from dad, played by Boo Arnold, who goes out for a drive to cool off, only to get in a car accident that puts him in a coma.  This turn of events leads to some guilt for Taylor, but also serves to motivate him to use his gift to the full.

The school's golf coach, played by Richard T. Jones, one of our favorite Christian actors, initially refuses to give him a second chance, only to relent once Taylor demonstrates his prowess in a practice round against the team's captain.  The film then bounces back and forth between Taylor working at his game and visiting his sticken father in the hospital.  There is also a steady dose of prayer since the boy is from a strong Christian family.

That and the other faith elements, which primarily involve his mother, played by Katherine Willis, and the school chapter of Fellowship of Christian Athletes, overseen by Jones' character and including Taylor's love interest Bailey - Alexandria DeBerry - are well done and harmoniously woven into the story.

On the negative side of the ledger, however, there are periodic instances of coarse language and a couple hot-and-heavy kissing scenes.  We will boldly assume that Ellis and screenwriter Tim Ogletree, who does double duty by also playing the older brother, are aiming for authenticity, but those elements struck us as a bit over the top for the Christian genre.

Read the rest of the review at ChristianFilmBlog.com and Box Office here.