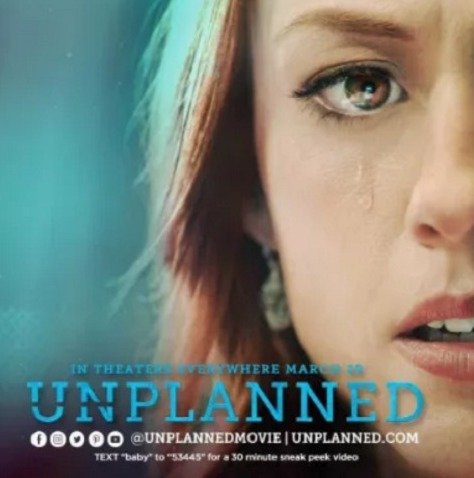 The organization says the R-rating on 'Unplanned' was for "some disturbing/bloody images" and was in no way politically motivated.

Pure Flix Entertainment, the family friendly label known for distributing God’s Not Dead and a few dozen other movies aimed at Christians, will release its first R-rated film next month, and it is none too happy about having to do so.

The film, Unplanned, tells the true story of Abby Johnson, who defected from Planned Parenthood to become a pro-life activist. While the filmmakers were certain they were making a PG-13 film, the MPAA has informed them that it will, in fact, be rated R unless all scenes of abortions are removed or altered.

The filmmakers are refusing to change anything, putting Pure Flix in the awkward position of having to open an R-rated movie on March 29. The company's other releases, roughly two dozen movies, were all rated G, PG or PG-13.

“A 15-year old girl can get an abortion without her parent’s permission but she can’t see this movie without adult supervision? That’s sad,” said Ken Rather, the executive vp of distribution for Pure Flix.

“We have three scenes in the film which directly address abortion, and the MPAA objected to all three,” added Cary Solomon. “They specifically made mention of objection to grainy, black and white sonogram images that were part of one of the scenes. It was clear that any meaningful treatment of the issue was going to be objectionable.”

Read the rest of Paul Bond's article in The Hollywood Reporter.