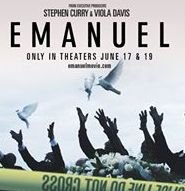 Brian Ivie, the Director of The Drop Box, has partnered with an impressive team of producers to share the poignant story of the Charleston church shootings. Executive Producers include NBA superstar Stephen Curry and Academy Award® winning actress Viola Davis (along with her husband Julius Tennon). Mariska Hargitay, an Emmy® and Golden Globe® winning actress, serves as a Co-Producer.

National headlines blazed: Churchgoers Gunned Down in Charleston, South Carolina. A white supremacist opened fire, killing nine African Americans. Forty-eight hours later, in the midst of unspeakable grief and suffering, the families of the Emanuel Nine stood in court facing the killer … and offered words of forgiveness. Their demonstration of grace ushered the way for hope and healing across a city and the nation. Featuring intimate interviews with survivors and family members, EMANUEL is a poignant story of justice and faith, love and hate, examining the healing power of forgiveness. In theaters June 17 and 19 only.