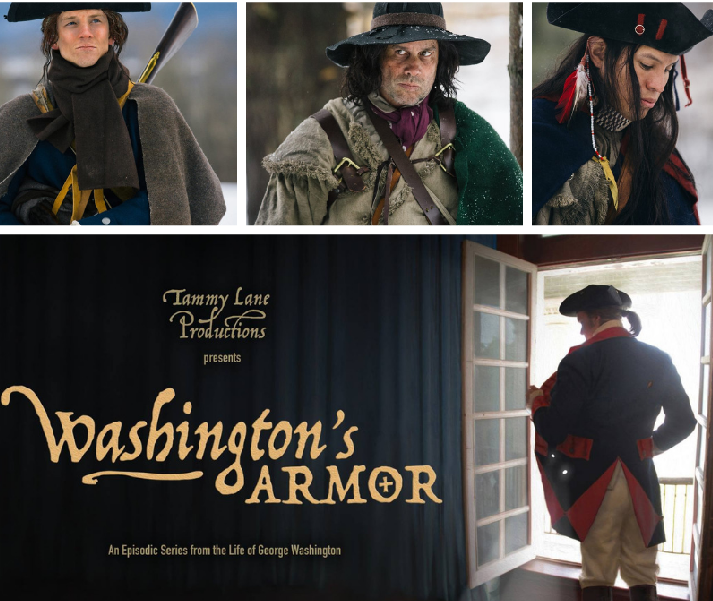 Tammy Lane Productions and Capernaum Studios have made the first casting announcements for Washington's Armor.

Introducing William Mellina as George Washington on Washington's Armor. William “Willie” Mellina was born and raised in Waco, Tx. His mom actually scheduled his birth on Monday, February 19th which fell on Presidents’ Day that year, the holiday originally celebrating the birthday of George Washington. Willie started singing, dancing, and acting when he was 20. He performed professionally in musical theatre in Chicago and “retired” from it after a few years due to cold weather and parking tickets. Willie says, “It was crazy God stuff that opened the doors back up to acting. I feel blessed and grateful to Tammy Lane and company for believing in me and giving me this opportunity on Washington’s Armor.”

Tim Ross plays Christopher Gist, George Washington’s seasoned sidekick in Washington's Armor. Tim has more than 80 film and tv credits including 29 feature films. He has been active in the faith film community with feature film credits including One Church, Mountain Top, Christmas In the Smokies, Cold Season, The Perfect Summer, Virtuous, Worth Fighting For, My Name is Paul, Waiting For Butterflies, Redemption of the Commons, Regen, Where We’re Meant to Be, Late One Night and more. Tim’s TV/mini series credits include: Flying Blind for the Billy Graham Library, Vindication and Supernatural.  Tim is a huge history geek, especially revolutionary colonial America and feels most blessed to help tell this compelling compassionate and true story.

Introducing the very talented Jeremy Gauna as the native guide accompanying George & Gist in Washington's Armor. Jeremy is a Choctaw Native American Actor/Model who represents the Choctaw Nation of Oklahoma. Born and raised in Texas, he was an all-state athlete in high school and dual sport college athlete who went on to play semi-pro basketball for the Oklahoma Stallions in OKC. He now resides in Dallas Texas. Gauna often says, "if I can make one person smile a day, then I am doing something right!". Everyone on set sees that he loves his work. His attitude is infectious, and you are sure to be smiling after talking to him. He believes, “humor is the key to ending racism and with more laughter and less focus on the hate, life will be better!”

Cast and crew recently began filming in sites in New York and Virginia for the first episode. Follow their adventures and updates on the Washington's Armor YouTube channel at http://tinyurl.com/WashingtonsArmor.