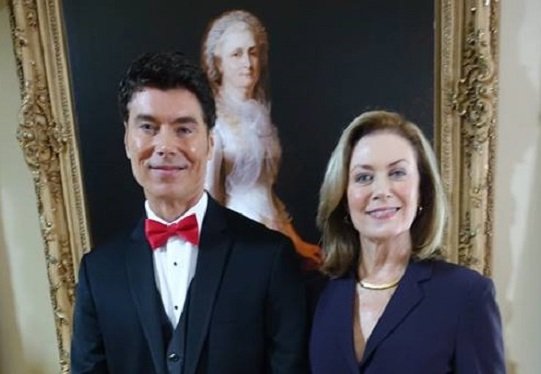 First Lady is a movie in production by writer/director Nina May, of Renaissance Women Productions, and features Corbin Bernsen, Nancy Stafford, Benjamin Dane, Holly Vagley, and others. Stacey Dash and Jenn Gotzon Chandler play assistants to the First Lady, and Burgess Jenkins plays a political nemesis, along with his wife,  Mallory,  played  by  Tonya  Christiansen.  Sandra Belforte plays Department of Homeland Security under-secretary,  Cameron  Cooper,  and  Dane's  love  interest. Dr. Alveda King has a cameo, and famed photographer,  Barry Morgenstein, who has photographed real presidents,  Trump  (pre-presidency)  and  Netanyahu,  plays The  White  House  photographer,  and  was  on  set  for some behind-the-scenes footage.

Primary production began with Texas resident, Benjamin Dane, at an Oval Office replica shoot in Texas, September, 14,  2018, then moved to D.C., wrapping in early October. Dane (Friday Night Lights, Beyond the Farthest Star) said his character, a widower, is the not ready for prime time Vice President Taylor Brooks, who must assume the presidency after an unexpected event. Brooks is in urgent need of a first lady to make the job official and win the peoples approval. But the first lady, played by Stafford, of Matlock fame, has other plans, unbeknownst to Brooks. "This isn't your typical political fare. It is a dramatically different comedy from writer/director Nina May," Dane said, adding that in the hotly contested political climate the movie depicted a refreshing and lighter side of the White House.

Read the rest of Benjamin Dane's interview with Kristen Collier in Creative Motion magazine (pages 8-11) and a special prayer for Nancy Stafford on page 33.